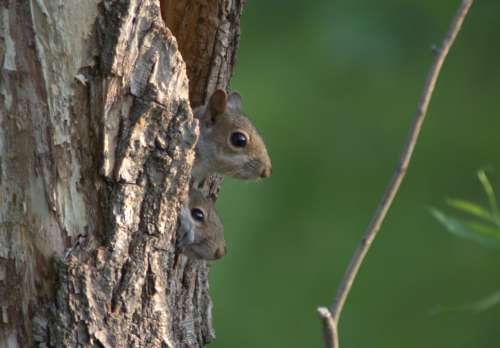 Young squirrels in a nest. (Pixabay)

A University of Guelph study on squirrel behaviour and adoption was featured in a Newsweek story about a viral TikTok video in which an adult squirrel rescues a baby squirrel.

The video, with over 6 million views, captures the rescue after a crow drops the baby while in flight. The video begins with the baby eastern grey squirrel on the side of the road, struggling to move and making loud squealing noises. Moments later, an older squirrel runs past the infant squirrel and stops on the other side of the road. The older squirrel eventually runs back over to the baby, picks it up and runs off holding it in her mouth.

To explain what possibly happened in the video, the story cites a 2010 U of G study that found red squirrels sometimes adopt abandoned pups when they are related. Researchers said older squirrels likely do this to continue its genetics, rather than out of kindness. Unique sounds made by squirrels help relatives identify one another.

However, the Newsweek story says it is unlikely this type of adoption is what occurred in the video given it is a rare occurrence and the U of G study found this scenario among red squirrels not eastern grey squirrels.