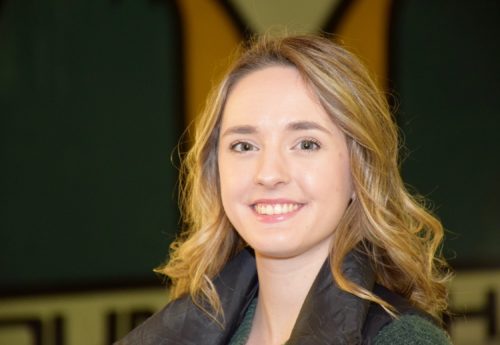 Back in November, University of Guelph student Alyssa Dugay enlisted fellow students to send “best wishes” cards to Canadian peacekeepers in Egypt in time for Christmas.

Her mission was to let the roughly 55 Canadian men and women stationed in the Sinai Peninsula – including her dad –  know that people back home were thinking of them during the holidays.

But she hadn’t expected any reply.

That’s why she was so touched by the response that arrived at the University this month from the head of the Canadian Forces group in the Middle East.

In his letter thanking the students for their notes and cards, Colonel Ryan Smith, commander of Task Force El-Gorah, wrote: “It warms our hearts knowing that we are in their thoughts and share similarities.

“Like university students, we too have daily challenges that we strive to conquer, early morning training days which often go into the evenings, deadlines to meet and time zones preventing us from communicating with our families back home.”

Dugay, a second-year animal biology student and a residence adviser in Mountain Hall in South Residence, said she was surprised and gratified to receive the letter, initially sent to the interim dean of the College of Biological Science.

She had asked residence advisers, members of Inter-Hall Council and other students to sign cards for the overseas contingent of army, navy and air force troops. About 70 students wrote notes, including one student whose family had immigrated from the Middle East with help from Canadian troops.

Dugay mailed the package of cards and letters to her father, Kevin, a sergeant major with the task force.

The Canadian Forces are part of the Multinational Force and Observers (MFO) peacekeeping mission in the northeastern Sinai, based less than 20 kilometres from Israel’s southern border. They work with troops from 12 countries worldwide to patrol the border area. The mission was established by the United States after Egypt and Israel signed a peace treaty in 1979. Canada has been an MFO member since 1985.

“It makes such a difference, knowing someone’s thinking of them,” said Dugay. “It meant a lot. It was nice to know that we had an impact on them.”

Her father, a 30-year veteran, arrived in Egypt for a one-year stint last summer.

Returning home to Barrie, Ont., after fall exams, Alyssa received a surprise gift of her own.

Her dad had arranged to come home for two weeks over the holiday. “He was wrapped up in a giant Christmas box in front of the TV,” said Alyssa. “He jumped out and said, ‘Merry Christmas.’  I said: ‘You’re actually home,’ and then I cried.”

Smith concluded his letter by calling U of G students and task force members “kindred spirits – hard-working people from many backgrounds coming together to achieve amazing goals. Go Gryphons!”