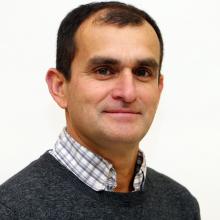 Prof. Luis Arroyo with U of G’s Ontario Veterinary College spoke to Global News about anthrax, which has been identified as the cause of death in seven farm animals in Saskatchewan.

Arroyo, a large animal medicine specialist with the Department of Clinical Studies, explained that the risk of anthrax in non-tropical regions such as Canada is low.

The bacteria that cause anthrax occur naturally in the soil and are present worldwide. Livestock can become infected by eating contaminated pasture, feed or soil.

But Arroyo said the risk of infection in Canada is low.

Among other things, Arroyo studies equine and bovine gastroenterology, as well as unexplained deaths in standardbred and thoroughbred racehorses.