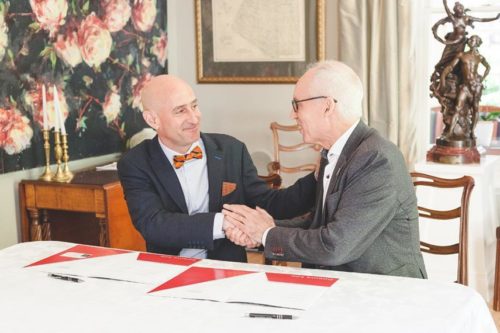 Marking the 50th anniversary of the University of Guelph’s School of Hospitality, Food and Tourism Management (HFTM), a $1-million donation by an alumnus will transform the program’s food lab into a state-of-the-art facility.

The gift comes from Michel Eric Fournelle, who graduated from the former hotel and food administration (HAFA) program in 1992.

“The gift will have such positive and broad impacts on student’s connection with and understanding of food, and its importance to health and society, it will truly be transformational,” said HFTM director Statia Elliot.

A highly successful real estate developer and philanthropist, Fournelle said he felt compelled to donate to the school after hearing about a gift in fall 2018 from the late John F. Wood. That gift supported the John F. Wood Centre for Business and Student Enterprise; the centre and HFTM are part of the Gordon S. Lang School of Business and Economics.

“My experience as a student at the University of Guelph was wonderful and has had a big impact on my life, I wanted to give something back,” said Fournelle. “U of G is Canada’s food university, so it seemed natural to support renovating the food laboratory and naming it in honour of Anita Stewart, who has done so much to advance Canada’s cuisine and food culture on the world stage.”

As president of the Fondation Famille, Fournelle has also led in supporting important initiatives to help less-privileged children in Quebec, including building a new care facility in Montreal.

“Although some of the original HAFA courses are long gone, what hasn’t changed is the school’s success in developing future leaders for the hospitality industry,” said U of G president Franco Vaccarino. “The School of Hospitality, Food and Tourism Management has grown immensely over the last 50 years, with 400 current undergraduate students, a strong co-op program, graduate degrees and over 5,000 alumni.”

The gift was announced during the school’s 50th anniversary celebration during this past Alumni Weekend.