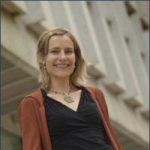 The story of a Salvadoran woman who was released after nearly 15 years in jail after a court ruled she had violated the country’s anti-abortion policies is making headlines.

Prof. Lisa Kowalchuk appeared in a Mar. 24 story on Global News about the woman, who says she never committed a crime and did not have an abortion but rather suffered a stillbirth.

A professor in U of G’s Department of Sociology and Anthropology, Kowalchuk talked about El Salvador’s particularly long sentences for women who — generally with little evidence — are suspected of having abortions.