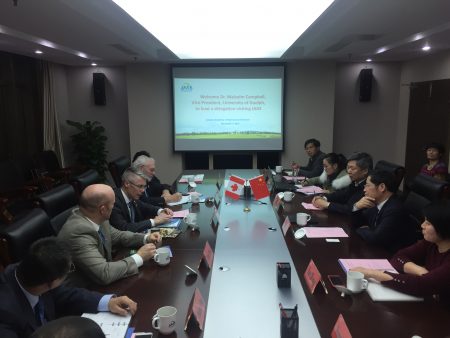 A new “digital handshake” system for tracing agri-food products from farmer to consumer – one intended to further strengthen Canada’s global reputation for high-quality, safe and sustainable food – was the topic of discussions this month for Malcolm Campbell, vice-president (research), as part of an Ontario trade delegation to China and Vietnam.

Being able to follow the flow of food products from farm to table is a strong selling point for Canada’s exporters and food producers increasingly looking to feed hungry markets around the world, including Asia, says Campbell.

The system is also intended to quickly pinpoint and address the source of problems such as food contamination. “To realize our potential as a global producer of safe, sustainable, nutritious food, we need good authenticated value chains,” he says.

Like a series of digital handshakes, blockchain provides a way to authenticate and validate the flow of goods from producer to consumer.

Under the system, successive transactions involving processors, wholesalers and retailers yield new digital ledger entries. Each block is encrypted to ensure privacy and incorruptibility of information while allowing parties along the chain to authenticate what they buy or eat.

“You’re effectively tracing the path of food from the producer to the processor, to the overseas shipper, the retailer and the consumer,” says Campbell, adding that blockchain technology has also been adopted by the financial services industry.

U of G has partnered with IBM Canada and Canadian commodity groups – notably Soy Canada and the Grain Farmers of Ontario – to look at ways to apply the concept to increase exports and secure overseas markets for Canadian goods.

IBM Canada is also a partner in the University’s Food From Thought project intended to use digital technology in finding sustainable ways to feed a growing world population.

U of G belongs to the Southern Ontario Smart Computing Innovation Platform, a research and development consortium of provincial universities, IBM Canada and the Ontario Centres of Excellence for advanced computing and big data analytics.

The provincial trade mission led by Ontario Premier Kathleen Wynne Nov. 26 to Dec. 6 has visited Nanjing in China, and both Ho Chi Minh City and Hanoi in Vietnam.

Campbell also discussed food traceability and sustainable agriculture with representatives of Nanjing Agricultural University in China and the National University of Agriculture in Vietnam.

He was featured in a Dec. 6 tweet and video sent by Wynne from China, praising U of G for leading innovation in agriculture and food.

The @uofg is leading innovation in agriculture and food. Our business mission is incredibly important for educational institutions looking to collaborate & innovate in the growing Chinese market. pic.twitter.com/zyI2DtzcbH