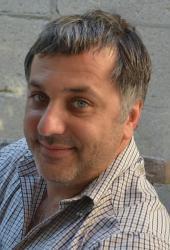 Prof. Stefan Linquist’s research revealing that the “gloomy” octopus – long believed to be solitary creatures – will interact socially when living in areas with a high population density was recently featured by the CBC. This finding was also covered by Yahoo News, Science Magazine and The Guardian as well as a number of other international media outlets.

Linquist determined that these gloomy octopuses, previously thought to be reclusive, were in fact purposefully interacting with one another in the roughly three-square-metre site. Typically these creatures spend most of their time in their dens and venture out only to get food, such as scallops. However, Linquist suspects these creatures may be social under certain circumstances.

At Octopolis, scallops were in abundance and one by one the octopuses settled into a structure close to the food source, creating an octopus “city.” Published in the journal of Marine and Freshwater Behaviour and Physiology, the study noted several octopuses chased each other, postured and even changed their colour. In one instance, an octopus kicked another one out of its den. Linquist says this new study could highlight normal behaviour that had not been observed before.