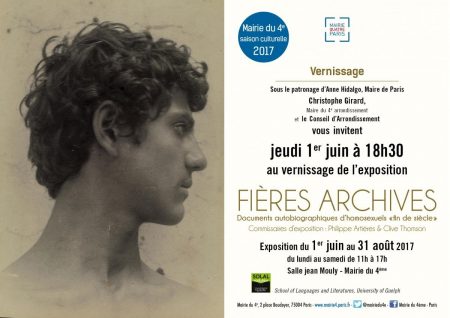 An exhibition curated by a University of Guelph professor exploring the hidden lives of homosexuals in France at the end of the 19th century has opened to rave reviews in Paris.

Clive Thomson’s FIERES ARCHIVES includes letters, diaries, manuscripts and photographs created and collected by people referred to at the time as “inverts” (les invertis). Few of the works have been exhibited before.

They include materials from the archives of French novelist and playwright Émile Zola and Georges Saint-Paul, a pioneering researcher on homosexuality, as well as from the collections of Alexandre Lacassagne and Georges Hérelle.

The exhibition is curated by Thomson and by Philippe Artières, historian and research director at the Centre national de la recherche scientifique in Paris. James Timms, a U of G master’s student in French studies completing an internship in Paris, also worked on the exhibition, which is sponsored by the College of Arts and the School of Languages and Literatures (SOLAL).

Thomson says the exhibition took two years to organize, including hundreds of hours of negotiating with libraries and private collectors. 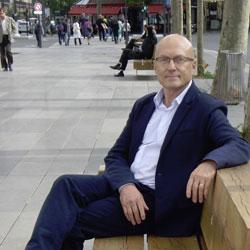 “It’s the most demanding project I’ve ever done, and certainly the most gratifying,” he said. “To be able to deliver an essential political message to a generalist audience while disseminating original research results – I finally managed the goal I’ve been aiming at for the past 40 years.”

Descendants of Zola and Saint-Paul were among the more than 100 people who attended the exhibition opening earlier this month.

During the opening, Christophe Girard, mayor of the 4th arrondissement in Paris, said the exhibition “shows part of the archives of these hidden lives, and is a reflection of the evolution of our society’s view of the homosexual community, which has long been despised and considered as degenerate… How many decades or centuries have gays had to wait to be respected and to cease being the object of fantasies, insults, insinuations and jokes?”

The project grew from Thomson’s 2014 book, Georges Hérelle: archéologue de l’inversion sexuelle “fin de siècle.” Funded partly by a grant from the Social Sciences and Humanities Research Council of Canada, the book was the first biography of Hérelle, an important figure in the history of homosexuality in France.