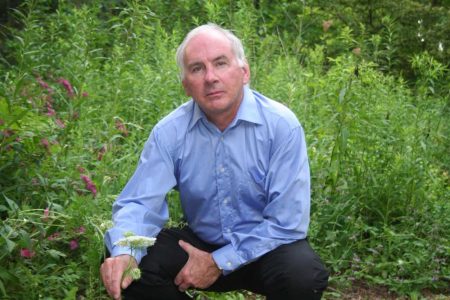 The University of Guelph professor who developed DNA barcoding is among a star-studded lineup — including Stephen Hawking, Oliver Stone, Larry King, and astronauts Buzz Aldrin and Sandra Magnus – speaking at an international science event this week.

Prof. Paul Hebert, Department of Integrative Biology, is the closing speaker at the fourth annual Starmus Festival June 18-23 in Trondheim, Norway. The event celebrates science and promotes its public understanding and appreciation. Participants include scientists, artists, musicians, philosophers, writers and business leaders from around the world.

Hebert plans to describe the motivation for and key elements of a proposed planetary biodiversity project. He was invited to speak by festival founder and astrophysicist Garik Israelian.

Hawking, the festival’s keynote speaker, will discuss black holes and time warps. Other highlights include a talk on artificial intelligence by Skype co-founder Jaan Tallinn and a panel discussion on science in the 21st century led by 10 Nobel laureates.

“Although an outlier among these science superstars, I’m pleased to have this opportunity to highlight the new technologies that are allowing humanity to gain the knowledge required to understand and protect the millions of species that share our planet,” Hebert said.

Hebert was the first scientist to propose that short, standardized regions of genetic material be used to identify species.

DNA barcoding enables scientists to identify species within hours – and, ultimately, minutes – using all life stages and even fragments of organisms.

Since 2003, Hebert and his research team have developed this approach into a multifaceted international research program. Research organizations in 25 countries have invested $150 million, and DNA barcodes are now available for more than 500,000 species and five million individual plants, animals and fungi.

Barcoding has led to the discovery of thousands of new species. It’s also being used to identify products in the marketplace, reveal mislabelled foods and natural health products, improve environmental monitoring, and quantify the environmental impacts of human activities.

In 2016, DNA barcoding became part of the United Nations strategic plan for enhancing and protecting biodiversity.

Hebert’s latest initiative, the Planetary Biodiversity Mission, aims to develop a “Library of Life” and improve our capacity to monitor biodiversity.