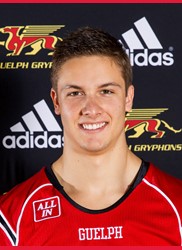 A University of Guelph student was selected in the 2017 Canadian Football League (CFL) draft Sunday.

Receiver Jacob Scarfone was a sixth-round draft pick for the Hamilton Tiger-Cats. Scarfone, a commerce student, missed the Gryphons’ 2016 football season due to a knee injury.

Ian Marouf, who played for U of G in 2013 and was named the team’s rookie of the year, was also drafted in the CFL’s sixth round. The defensive lineman was picked by the Winnipeg Blue Bombers.