A new play researched and performed by cast members with Down syndrome, and written and directed by University of Guelph professor Judith Thompson, is receiving strong praise. 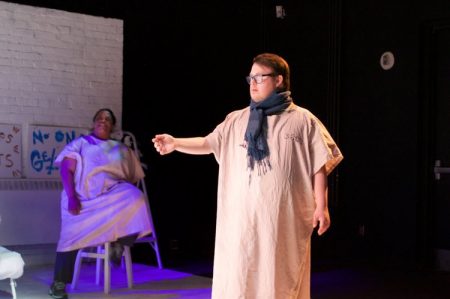 Presented by the rare theatre company, the play runs until May 20 at the Young Centre for the Performing Arts in downtown Toronto.

A Toronto Star review said “the overwhelming charm and honesty of the performers is captivating,” and the play was listed as one of the five top things to do in Toronto by the Globe and Mail.

The performers first directly address the audience, then transform into patients at an institution, where they stage a play – Romeo and Juliet.

Thompson, a widely recognized playwright, director and actor, said she hopes the play gives a voice to people who are often marginalized.

“The play explores forbidden love and the horrors of the institutionalization of people with differences,” said Thompson, a professor in the School of English and Theatre Studies.

“Shouldn’t we see on stage what we see in the world? Our company is devoted to using our theatrical skills to create theatre with individuals from these communities, giving them artistic space to reveal their souls and speak their truths, so that they are truly heard and seen by the public.”