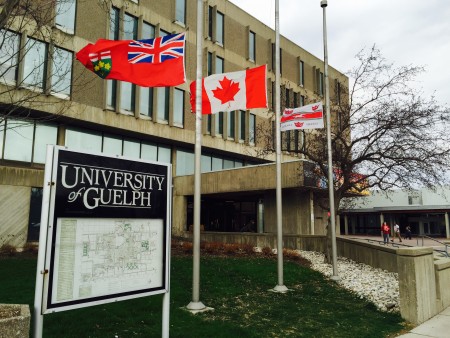 The University of Guelph will lower its flags to half-mast at noon on Friday to mark the Day of Mourning in Canada.

This is the 26th anniversary of the event, observed on April 28 each year to honour people who have died or been injured on the job.

A joint proclamation recognizing the day has been issued by U of G and the University’s employee groups.

A ceremony and candlelight procession will begin at 11:45 a.m. at the portico on Johnston Green and end in front of the University Centre.

A flag-lowering ceremony to be held at noon will include remarks from University officials and members of the central joint health and safety committee.

The National Day of Mourning was officially recognized by the federal government in 1991. Now marked in 80 countries, the day has been adopted by the American Federation of Labor and Congress of Industrial Organizations and the International Confederation of Free Trade.