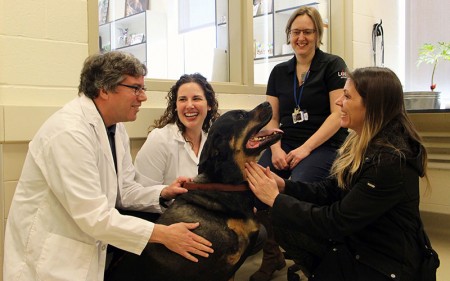 Paul Woods (left) with Cujo, the first dog in the rapamycin trial.

Cancer research at the University of Guelph that aims to improve the quality of life for both dogs and people is receiving national media attention.

A story about the work of Paul Woods, a clinical studies professor in the Ontario Veterinary College (OVC), aired on CBC’s The National Jan. 4.  The research was also featured in an online CBC news story and on CTV news last month.

Woods is heading a clinical trial on bone cancer in dogs with the U.S. National Cancer Institute’s Comparative Oncology Trials Consortium. OVC is the only Canadian partner in the research trial, which involves 20 American institutions and is funded by the non-profit Morris Animal Foundation.

Woods and his team are evaluating the effectiveness of the therapeutic agent rapamycin in treating osteosarcoma in dogs. Osteosarcoma is the type of bone cancer that killed Canadian icon Terry Fox.

Rapamycin has been used in kidney transplant patients as an immunosuppressant, and, more recently, it’s being used as an anti-tumour agent. Now researchers want to know if it also can delay or even prevent metastasis. Read more

Woods is the co-director of OVC’s Institute for Comparative Cancer Investigation. “Dogs, in particular, develop many of the same types of cancers that we find in people. So by studying dogs with cancer, we can help fight and perhaps even prevent the disease in humans while improving care for the animals,” Woods has said.

OVC professor Byram Bridle is also studying osteosarcoma in dogs, backed by a grant from the Terry Fox Research Institute. Bridle, a viral immunologist in the Department of Pathobiology, hopes to test an innovative vaccine. His research combines two novel cancer therapies — immunotherapy and oncolytic viruses – that harness a patient’s immune system to prevent metastasis.

Osteosarcoma research by both professors was featured in a 2016 Canadian Press story that received national media attention.

The story on CBC’s The National also highlighted other ongoing cancer research at OVC, including its lymphoma studies.