Why is it important to go to Mars? What can people learn from the red planet that will benefit science on Earth?

Those are two of the questions to be explored during this year’s Derry Dialogues series at the University of Guelph, as four speakers discuss the future of space exploration Nov. 14 from 6 to 7:30 p.m. 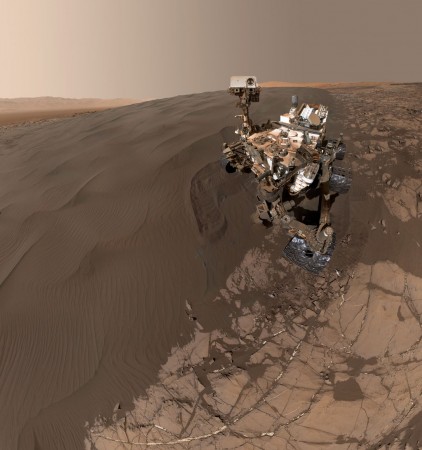 This year’s panel includes U of G professors Mike Dixon, Environmental Sciences, and Ralf Gellert, Physics. Dixon studies how to grow plants in remote conditions including space. Gellert was the lead engineer for the alpha particle X-ray spectrometer that helped detect the presence of water on Mars.

They will be joined by Bob Thirsk, former astronaut and chancellor of the University of Calgary. Thirsk took part in various missions from 1984 to 2012, and in 2009 became the first Canadian astronaut to spend a long-duration expedition aboard the International Space Station.

Panellist Linda Billings is a consultant to NASA’s astrobiology and planetary defence programs.

The panel will be moderated by Sofie Lachapelle, acting associate vice-president (academic), who said the idea of space travel and going to Mars taps into our desire to explore the unknown.

“When it comes to space exploration, we have more questions than we have answers,” Lachapelle said.

“The significant scientific challenges are matched only by the substantial ethical and social issues. While the spinoff benefits of space exploration are quite substantial, the enduring value of going to Mars and other planets is what this will tell us about ourselves.”

The event will take place in Room 2520 of the Richards Building, and is free and open to the public.

The Derry Dialogues are intended to introduce U of G students to scholars addressing worldwide challenges and promoting engagement and global citizenship.

The series is named for former U of G Board of Governors chair Douglas Derry and his family. The Derry Dialogues are supported by a gift from Derry and his wife, Margaret, an adjunct faculty member in U of G’s Department of History.

Now chair of Poplar Lane Holdings Ltd., Douglas Derry belonged to the University of Guelph’s Board of Governors for 10 years and the Board of Trustees from 2007 to 2013.