A film highlighting the struggles and successes of the first black Americans in the Canadian Football League (CFL) will be screened at the University of Guelph on March 10.

Gridiron Underground will be played during a free event in Rozanski Hall, Rm. 102, at 6 p.m.

The 73-minute-long documentary looks at how black athletes broke social and racial barriers that existed many decades ago. A panel discussion will follow. 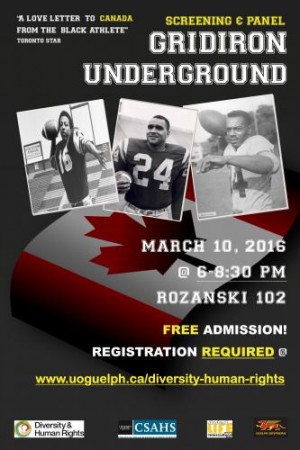 Organized by Guelph’s Office of Diversity and Human Rights (DHR) and other campus departments, the event will provide a “uniquely Canadian perspective on the history of race relations in our country,” said DHR administrative officer David Gibson.

“As we know, issues of race, diversity and representation are high-profile on campuses throughout the United States and Canada. It’s important to explore these issues with sensitivity, especially in the intellectual climate of a university.

“This film looks at some historical issues through the lens of football, such as the belief in the 1950s that blacks could not play quarterback. That belief carries on in some people today.”

During the panel discussion, the film’s producer, John Williams Jr., will talk about the making of the film and its message.

“This is an opportunity for students, staff and faculty to discuss the film’s central themes of race and inclusion,” said Williams Jr.

“As the film is highly entertaining, accessible, heartfelt and occasionally lighthearted, it provides a uniquely positive way to begin the crucially important, but not always comfortable, dialogue about race and prejudice.”

RSVP through the DHR website, as seating is limited.