Pharmaceutical companies may be able to lessen their use of animals for drug testing if researchers adopt a new “micro model” developed by University of Guelph researchers.

This new microfluidic model would rely more on lab tests than on animal tests, provide results more easily and quickly, and require only small amounts of drugs, said the researchers.

Engineering professor Suresh Neethirajan, undergraduate student Evan Wright and other researchers in U of G’s BioNano Laboratory developed this concept over the past two years. 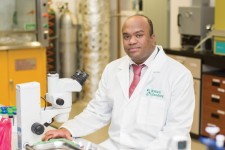 “The model we developed could reduce expenses for drug companies while eliminating some of the ethical issues that stem from animal testing,” Neethirajan said.

“There would still be a need for animal testing, but this would lessen the number of animal tests needed. Storing, housing and monitoring animals can be very expensive — plus, you only need very small amounts of the drugs to test the medications.”

“For a test to be beneficial, it has to provide a true representation of a wound. Up to now, most lab testing only focuses on one pathogen, but the nature of a wound is so complex, testing needs to cover all these pathogens,” Neethirajan said.

The researchers hope their wound model, consisting of microfluids and glass slides, can be mass produced for use by scientists worldwide.

He said the lab model allows “wounds” to be quickly altered, and testing takes much less time than in animals. It mimics human skin tissue and allows researchers to watch interactions between bacteria and drugs being tested.

The micro model also requires only a very small amount of the drug being analyzed in order to conduct the test.

The scientists next plan to study how the “wound” interacts with electricity.

The study is published in the journal Biotechnology and Bioengineering.