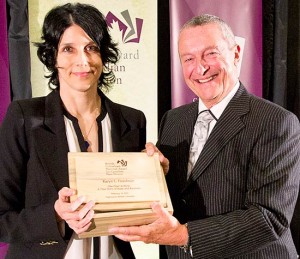 A University of Guelph philosophy professor has won the British Columbia National Award for Canadian Non-Fiction, one of the most lucrative literary prizes in Canada.

Karyn Freedman won the coveted $40,000 prize for her book One Hour in Paris: A True Story of Rape and Recovery. The award was announced in Vancouver Friday by the British Columbia Achievement Foundation, and presented by Peter Fassbender, BC’s Minister of Education.

The jury for the 2015 prize was made up of Globe and Mail arts editor Jared Bland, journalist and writer John Fraser, and Simon Fraser University chancellor Anne Giardini.

The jury cited One Hour in Paris as a “book about rape, but, more than that, it’s a book about our collective failure to address the ways in which sexual violence shames and silences its victims and taints our society as a whole.”

Freedman’s book tells her personal story of rape and perseverance. It takes the reader on a journey of pain and recovery, from an hour of brutal violence in Paris in 1990 to a court trial, to years of silent suffering, to scholarly pursuits and a faculty position, to volunteering in a rape crisis centre in Africa.

In the book, Freedman also openly discusses the obstacles faced by rape survivors and the personal consequences on sex, intimacy, love and relationships.

“I wrote this book because I thought I had something to share, and I had reached a stage in my own recovery where I felt I could tell my story in a way that others might benefit from,” Freedman said.

Other finalists were U of G alumna Alison Pick for Between Gods: A Memoir; Chantal Hébert with Jean Lapierre for The Morning After: The Quebec Referendum and The Day That Almost Was; and James Raffan for Circling the Midnight Sun: Culture and Change in the Invisible Arctic.

The four finalists were selected last December from the 10 semifinalists chosen earlier from a pool of 134 nominees.

The 2014 prize winner was retired U of G professor Thomas King, who was recognized for The Inconvenient Indian: A Curious Account of Native People in North America.