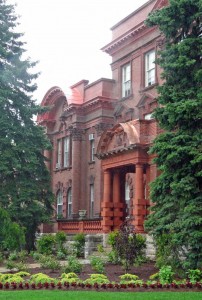 The University of Guelph has won a prestigious heritage award for rehabilitation of its Macdonald Institute building.

A 2014 Ecclesiastical Insurance Cornerstone Award for Building Heritage from Heritage Canada The National Trust (HCNT) was presented to U of G Friday in Prince Edward Island by Frank Lewis, PEI’s lieutenant-governor.

The awards were created to celebrate excellence in the regeneration of heritage buildings and sites in Canada.

“This is a great honour for our entire team,” said Bob Carter, U of G’s associate vice-president (physical resources).

Built in 1903, Macdonald Institute is among a number of buildings on campus that are more than 100 years old.

“We take the responsibility of maintaining our heritage buildings very seriously, which requires commitment and careful planning and execution. It’s wonderful to have our efforts recognized in this way,” Carter said.

The project involved rebuilding of Macdonald Institute’s exterior parapet and portico, and interior restoration of its main staircase and stained glass. The project included roof replacement and upgrading of a large lecture hall. The building was fully occupied during construction, which was completed in 2009.

“This award encourages continuity of heritage buildings by maintaining and adapting them in respectful ways for contemporary uses, and the Macdonald Institute definitely represents that,” said Wilfred Ferwerda, project manager from U of G’s Department of Physical Resources. He visited PEI to receive the award.

“The building had potentially serious structural issues, and we revitalized it and enhanced it for 21st-century learning and research. By doing so, we have also preserved an important legacy for one of U of G’s founding colleges, and enhanced the sense of place for the University community.”

In total, $8-million was spent on restoration efforts within Macdonald Institute from 2002 through 2010, including nearly $800,000 in private donations. About $5.5 million of that amount was for the rehabilitation initiative that received the heritage award. Funding came from U of G’s capital renewal program and a $4-million grant from the Ontario government.

The awards presentation was part of HCNT’s annual conference, which was held at the Confederation Centre of the Arts in Charlottetown.

U of G was nominated for the awards by Jane Burgess of Stevens Burgess Architects Ltd. Winners are selected by an independent jury from a list of candidates.

Previous award-winning projects include the Library of Parliament in Ottawa and the Pacific Central Station in Vancouver. 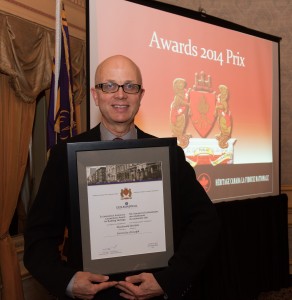 Heritage Canada The National Trust, formerly the Heritage Canada Foundation, is a national charity intended to save historic places.  Its patron is Canada’s governor general.