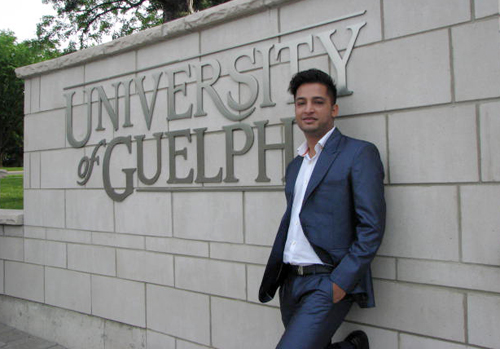 When well-known Punjabi film director Ammtoje Mann called to ask him if he wanted to act in a movie, U of G student Rupan Singh Bal figured it must be someone playing a joke.

Fortunately, Mann was persistent and went through Bal’s Facebook page to track him down again. He hired Bal for the 2013 movie, Haani, with Bal playing a major role. That first job was the start of a new career for the young actor. Bal’s next movie, 22g Tussi Ghaint Ho, was released this summer; other projects are underway.

Born in India, Bal arrived in Canada in 2005 and quickly connected with the large Punjabi community in Brampton, Ont., where his family lived. As a criminal justice student at U of G, he met Jasmeet Singh, who uses the online persona Jus Reign, and the two decided to create and post videos on YouTube. Their goal: to have some fun.

“We’d come up with some concepts and start acting them out on camera,” says Bal. “We didn’t script anything, and I didn’t dream at that point of becoming a real actor.”

Bal often played the role of Jus Reign’s mother, wearing an obviously fake wig and exaggerating Punjabi cultural clichés with hilarious results. You don’t have to be of Punjabi heritage to appreciate the humour, says Bal.

The videos were soon attracting millions of viewers – and not just in Canada. “Then Google called us about advertising with the videos,” Bal says. “We didn’t even know until that point that you could make money with YouTube.”

Not only can you make money, you can also travel. Bal and Jus Reign have attended YouTube festivals around the world, meeting their fans and generating more publicity.

Even though their videos were soon bringing in a decent income, and Bal was beginning his Bollywood movie career, his parents encouraged him to complete his degree. His father has a master’s degree in mathematics and his mother is a teacher; Bal says education is “the whole thing” for them. After he completed filming in India, Bal flew back to Canada to finish the two extra courses he needed at U of G. He switched from criminal justice to political science and graduated this past June.

While Bal and his friends still do some YouTube videos, his focus now is appearing in Bollywood movies, although he says it’s a bit embarrassing at times. “I always made fun of all the clichés in those movies and now I’m doing them.

“The love scenes were especially challenging, and Bollywood movies are all about love,” Bal says. “There’s also a lot of dancing. Unlike our YouTube videos, it often takes 20 takes before the producer is happy with what has been shot.” 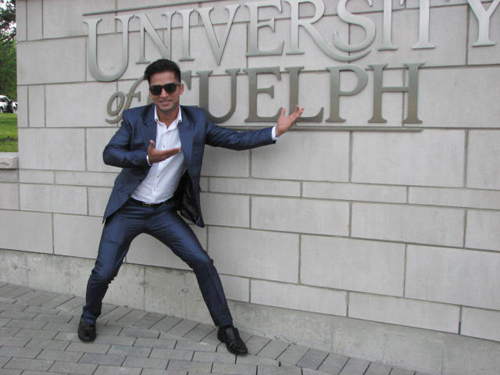 Rupan Bal shows his pride for U of G.

He’s recently finished a movie with an unusual concept: games for smartphones that continue the storyline of the film. “In the movie, there is a girl I want to marry, and her parents are trying to stop us from getting together. They enlist others to try to stop us. In the game, the story continues, and the number of enemies chasing me increases at every level. It’s kind of fun, although tricky to film all the components,” he says.

Those tougher moments of acting haven’t diminished Bal’s love of film making. His dreams – he had previously planned on going to law school after graduating from U of G – have shifted. “My whole goal now is to go to Hollywood, California. I am hoping to do well in Bollywood movies and from there go to Hollywood. I know many people struggle as actors but I am optimistic. These dreams just started a couple of years ago, and look how far I have come already. And I love it,” he says.

Another dream: producing his own Canadian movie, shot in Brampton, about immigrants from India adjusting to the Canadian way of life. “We are always so drawn back to our culture,” he says. “This will not be a cliché movie, but something people can relate to – even though it will still have a Bollywood touch to it.” In November, he’ll be back in India to start shooting another film, and some of his friends who appeared in his YouTube videos will have roles as well.

“It’s hard to believe that so much has happened from our little videos,” he says.