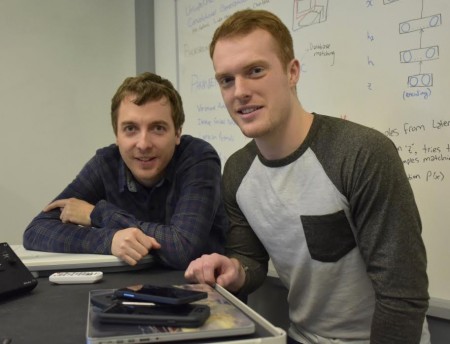 Keeping your mobile phone secure and protected is important to avoid identity theft or other security compromises. But phone passwords can be hard to remember, and current authentication methods are cumbersome.

One day you might not need passwords at all, thanks to research involving Google ATAP and University of Guelph researchers.

“Mobile users find typing in passwords intrusive to their enjoyment of the phone,” says Lacey. “So we were looking for a solution that could help improve the usability of their devices.”

Lacey and Neverova helped with a learning problem called continuous authentication, or guaranteeing user identity through multiple phone sensors, such as touchscreen and keyboard input and images.

Google ATAP contacted Taylor as an expert on machine learning. This computational technique essentially teaches computers to learn like humans by finding patterns in large amounts of raw data.

In one form of machine learning called deep learning, a computer is taught to recognize patterns within multiple kinds of data—sound, images, keystrokes—and place them into categories. That allows the device to use the computer equivalent of a human’s neural pathways to, for example, distinguish between individuals.

Under U of G’s agreement with the company, any research groups on campus may collaborate with ATAP.

Funding for this research was provided by Google ATAP.